Fewer Denver schools earned the top two ratings this year on the school district’s color-coded scale than the last time it issued ratings in 2014, according to results released Thursday.

The results push Denver Public Schools further away from its ambitious goal for 80 percent of its students to attend a high-performing school by the year 2020.

More Denver schools this year earned the top two ratings on the district’s five-color scale than ever before, a spike officials say reflects the record academic progress students are making.

However, nine schools that otherwise would have scored top ratings were downgraded for having large academic disparities between traditionally underserved students and their more privileged peers under a new rule meant to spur schools to close those gaps.

In all, 122 of Denver Public Schools’ more than 200 schools are rated “blue” or “green,” according to results released Thursday. That’s up from 95 schools last year

What a difference a year makes, especially when you change the metrics!  Here are some questions and observations that arise from these these starkly differing openings.

If by 2020 you are the Denver Public Schools District and your goal is to have 80% of your students sitting in what you define as high quality seats (according to your color-coded School Performance Framework – SPF – those seats are blue for Distinguished and green for Meets Expectations) and you are confronted with the reality of the 2016 scenario above, and

If you have an important school board election coming up in less than a month and you want to protect your incumbent candidates and your “reform” agenda, and

If community meeting after community meeting implores you, the District, NOT to close any more schools but rather put real time and resources into the schools with very high concentrations of students living in poverty and not speaking English as their first language and these schools are located in Board Districts where the seats are being contested, and

Even if you have been warned repeatedly from both sides of the philosophical education debate that so much emphasis on GROWTH over STATUS is misleading, and

If all of these decisions are determined by high stakes test scores where proficiencies are terrible (39% in reading and 30% in math) and achievement gaps enormous (the highest in the state and among the highest in the nation),

Interesting that this exact scenario is being played out in Denver today. Here is how this is playing out:

To make it appear that schools are performing better than they actually are, assuming the real metric parents and students should care about is about acquiring grade level skills and becoming proficient at them, you change the SPF metrics to give academic growth even more weight than previous years.

This is exactly what transpired within the many floors of the Denver Public Schools administration building.  As you can see from the graph on the top, the weights of the School Performance Framework i.e., the points allocated for Growth and Status for elementary, middle and high schools was 51%, 57%, and 58% respectively.  Status, or proficiency, weighed in at 27%, 24%, and 41%.  Strong emphasis on Growth over Status with ratios of 3:2, 2:1, 2:1. These weights were proposed in May 2016 and were apparently going to be used for the 2017 SPF rankings.

Somehow, the powers that be – the superintendent, his staff, and the Board of Education Directors, who must approve such changes – determined these weights would not make the DPS  “reform” agenda appear to be succeeding in teaching reading and math  skills.  Educating kids? Well, that’s a whole other story, not to be confused with testing kids. And so in July 2017 this rubric was changed to what you see on the bottom graph: Growth 73%, 71% and 44% for elementary, middle and high schools.  Status (proficiency) was reduced to 22%, 22%, and 10% (!) respectively. Ratios were not even mentioned.  But they are 3:1, 3:1, and 4:1.  And in order to push the view that early literacy was working they added this to the SPF:  “Early literacy measures will carry more weight to continue supporting our early literacy goals.”  Hmmm.  Ends defining the means, anyone?

Then, because the economic and ethnic gaps are so large, the same decision makers added a new metric to try to make the enormous numbers look better.

To give some schools heavily populated by students who do not speak English as a first language and who live in poverty, you add a metric called “academic gaps indicator” but you do not hold schools with very high levels of these students accountable this year. Superintendent Boasberg: “The purpose of the academic gaps measure is to make clear the priority and importance that we place on a school doing everything possible to close its gaps,” he said. To see so many schools improve is “very heartening.” This from the leader of the district that is consistently at the bottom of both national and state achievement gaps for having not only the largest gaps but for having INCREASING GAPS. According to just released Colorado Department of Education information DPS is experiencing gaps of 42% in 4th grade reading and math, 46% in 7th grade reading, 50 in 7th grade math.

And then there is the CRPE report putting Denver’s gaps at the very largest of 36 studied urban districts.

And of course, through very convoluted machinations and because politics is never far from any decision this superintendent and his 7-0 school board make, no schools will be closed this election year.

To avoid a very contentious political issue that could adversely affect “education reform” candidates running for election and re-election in a few short weeks, you avoid closing any schools this year. School closure has been very controversial in Denver, especially in two of three districts facing voters. Communities, parents, students, do not like to have their neighborhood schools closed or turned around or transformed or whatever, the action of the day is. And one school community in particular that was closed this year, has become very motivated and activated to elect new school board members. So what has DPS done to assuage school communities under this cloud of closure?  I bet you can guess.  Yes, they have postponed any closures till next year.

Finally, I will give you an example of the disconnect between SPF ratings and proficiencies in a school. Great thanks to friend and former DPS teacher Mary T. Sam who disaggregated proficiencies for all Far Northeast Schools.

That is where we are in Denver today.  The DPS public relations department is working overtime to avoid using the words proficiency and status.  This from the Director of Public Affairs as the SPF was being released.  Please note again, there is no mention of actual academic proficiencies.

Our schools are improving: Ten years after the first SPF release in 2008, a record high number of our schools achieved our top ratings, Meets Expectations/Green or Distinguished/Blue. Most recently, a third of our schools increased their overall rating between 2016 and 2017, fueled by our students’ record growth in English language arts and early literacy. And, we cut the number of schools receiving our lowest rating by two-thirds, from 31 to 10.

Growth over time: Districtwide, the number of Green and Blue schools has increased from 64 in 2008 to 122 in 2017, reflecting a stronger set of high-quality schools for district families. Today, 60% of our schools are rated Blue or Green.

Focus on equity: To emphasize our commitment to equity, this year we implemented our Academic Gaps indicator. We believe deeply that all children are capable of success. Nine schools saw their ratings decline and will receive additional supports in closing gaps this year based on this indicator.

Supporting our schools: Intensive supports and, when necessary, restarts (new programs and staff) are resulting in better schools for our kids. Nearly 80% of district-run schools that have had intensive interventions since 2010 continue to perform better than the schools they replaced.

School Performance Compact: We congratulate the students, staff and families at six of our seven schools that were being considered under the School Performance Compact. Based on improved results for those six schools on the 2017 SPF, only one school — Cesar Chavez Academy — is being designated under the Compact. In light of its performance and pursuant to the terms of its charter school contract, Cesar Chavez will close at the end of the 2017-18 school year. 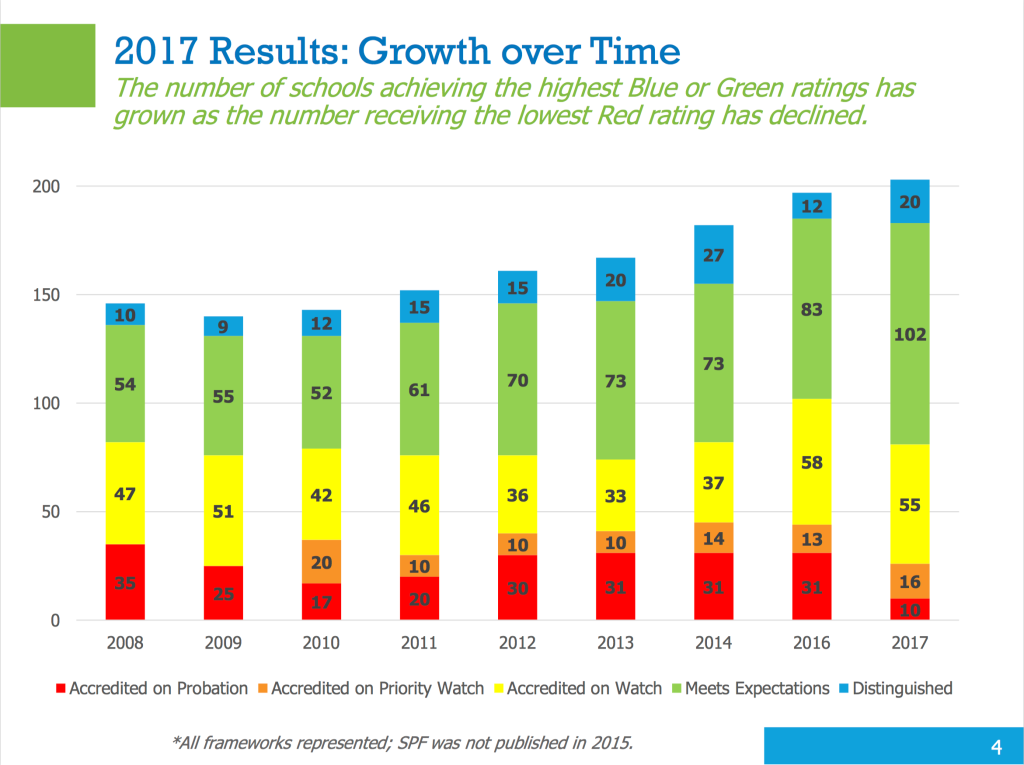 It is almost miraculous what you can portray when you are in charge of the rubric, the metrics, and the data. Almost anything is possible.  Magic wand = magic results. Hard to compare apples to apples when pears and oranges are added to the mix. Twelve years and the numbers the District won’t share with you:  39% students reading at grade level, 30% of student performing math at grade level, and achievement or opportunity gaps between students of differing economic status of over 40%.  Time for a change.  Election Day is November 7.  Ballots drop Monday.  All mail-in election. Flip the Board: Sochi Gaytan, District 2; Dr. Carrie Olson, District 3; Tay Anderson, District 4; Robert Speth at large. Our kids deserve them.