Nineteen year old (!) Tay Anderson, student, organizer and candidate for Denver Public School Board orchestrated what can only be described as a masterful rally and march against corporate greed and public school privatization in Denver Wednesday, July 19. At least one thousand public school advocates gathered on the State Capitol steps, and lead by the community-based organization Our Denver, Our Schools, State Senator Andy Kerr, and event organizer Tay Anderson (who education historian Diane Ravitch endorsed) proceeded to march to Denver’s Convention Center Hotel to protest the appearance of Secretary of Education Betsy DeVos at the annual ALEC meeting being held in Denver this week. 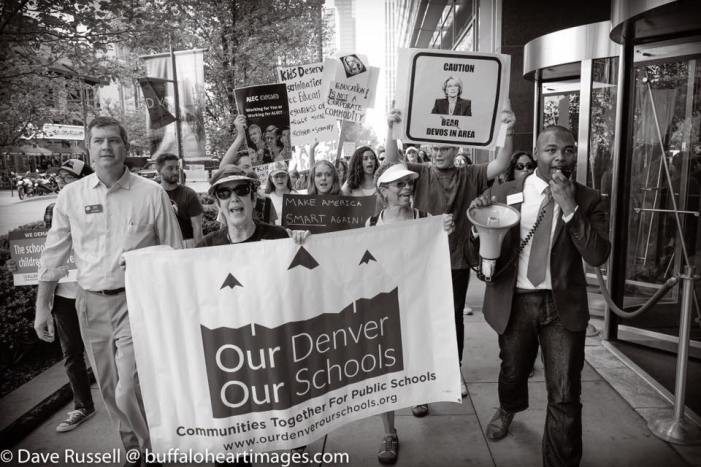 For those not familiar with ALEC (the American Legislative Exchange Council) it is a national secretive lobbying group on steroids, committed to influencing state legislators and legislation for the benefit of corporations at the expense of the people. It develops “model legislation” on everything from school vouchers to the environment and gun control and everything in between. ALEC believes in “limited government,” “free markets, “ and “federalism.” It holds its meetings behind closed doors. You must be a paying member to attend. One of its latest ideas is to establish Education Savings Accounts: put your extra money in and use it in conjunction with public funds for your children’s education. Eighteen states introduced the legislation in 2017; only North Carolina passed it. ALEC is hoping to get Colorado in its ESA win column. ALEC’s funders are a Who’s Who of conservative foundations and individuals: Koch, Scaife, Coors to name a few.

Three current cabinet members are scheduled to speak at this week’s Denver convention: Alexander Acosta, Labor, Ryan Zinke, Interior, and…Betsy DeVos, Education. Yesterday’s rally and march focused on the unqualified DeVos and her privatization and corporatization policies. Under Anderson’s leadership and with the help of Colorado’s unions, Colorado Resistance groups, and many other community groups, teachers from across the state joined with other union members, community supporters, students and parents to demonstrate and express their opposition to the direction ALEC-led lobbyists are pushing public education. Chants of “Hey, hey, ho, ho, Betsy DeVos has got to go!” and my favorite, “Show me what democracy looks like! THIS is what democracy looks like” echoed throughout the buildings the marchers passed. In fact, several ALEC attendees were eating at a hotel restaurant as the marchers circled the block and by the second passby the shades were drawn so they would not have to see the signs and faces of those opposing them. 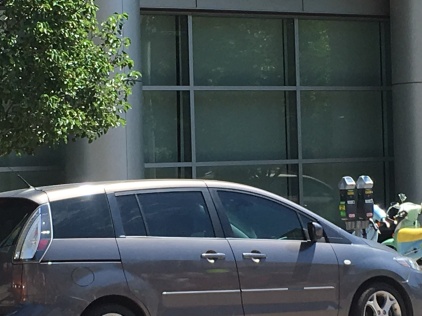 DeVos’ appearance in Denver garnered so much interest the five Supremes made an appearance.

Why such emphasis in Denver? Because Denver has been at the center of the failing “education reform” movement for the past 12 years.  And while many “reform” organizations keep trying to make Denver Public Schools look successful, the academic outcomes continue to be dreadful, opportunity gaps and segregation of schools keep increasing.  Four of seven seats are up this November. Supporters of real public education, lead by Our Denver Our Schools are working hard to get these four candidates elected.  Their election could stem the failing “reform.”

And in spite of the incumbents’ attempts to distance themselves (one incumbent actually appeared at the rally long enough to have his picture taken with his anti-DeVos sign) from DeVos/Trump, here are some of the similarities:

July 19, 2017 was a fulfilling day for this 1960s activist.  Marching and chanting with people from so many different backgrounds, from so many different age groups, united to fight privatization and corporate greediness was very moving.  And as someone who grew up in a strong union family and city, seeing labor and other civic minded groups united under the leadership of such a gifted young man gave me hope.  I must confess, however, after three hours in the almost 100 degree heat (no climate change, though, so don’t worry!) this ’60s protester had to take a bit of a nap to get ready for the next big battle.  But I sure plan on being there! I hope you will be there, too.